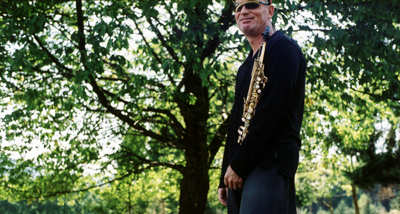 Born 1957 in Hamburg; musician and director of radio plays; lives in Strasbourg; composes for his instru­ment, the soprano saxophone and for radio plays.

Since 1987 lectorship for radio plays; dramatic advi­ser and assistent director for the radio play depart­ment of the SWR in Baden-Baden; essays on music and literature/philosophy; portraits of musicians and collages for the radio; music for theatre.

Since 1989 directing and adapting radio plays, for example Esquisse Radiophonique (world premie­re)*, Cascando and Words And Music from Samuel Beckett; an essay on Beckett; three radio­phonic pieces with texts from Daniil Charms, one of them with and for children**; several prizes.

From 1996, mainly music (soprano saxophone); in­ten­se examination of Monks and Lacys music;
collaboration with the sculptor, Daniel Depoutot;
own compositions.

*Steve Lacy wrote and played the music for this fragment.